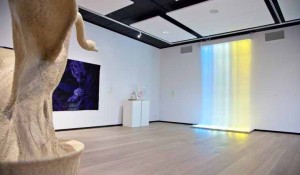 News bulletin April 2013: By the end of this decade NASA plans to capture an asteroid and drag it with a unmanned probe close to Earth in order to study its behaviour and composition. The information will be useful in the event of similar bodies on collision course and space flights to Mars. Science Fiction? Not if NASA has anything to do with it. Weaver of fantasies Kristin Sæterdal has her own ideas about the impact this will have: Kabooom!

The world as a closed ecosystem: where technology reigns. The artificiality of ultimate control is what concerns Kristin Sæterdal (1963, Trondheim, Norway) the most. Her control room made up of numerous tints of red, The Red Capsule (2011), is stripped of any trace elements remotely reminiscent of nature (anything natural). Even man – normally the controller behind the button – is out of the picture. Forever? The Pixar animation film Wall·E (2008) demonstrates what can happen should man make the world uninhabitable. A vestige of the human race drifts aimlessly around the universe in an autarkic space station where the onboard computer is the boss. And, would you believe, thanks to a small (waste-collecting) robot, rebellion against technology and a return to Earth become possible.

In Kristin Sæterdal’s fantasy worlds – in the engaging graphic style of comic strips – humans are absent. The scale of her tapestries has the effect of absorbing the viewer right into the depicted scene itself. When hung across a corner the tapestry turns in on itself slightly, reinforcing the effect of an enclosed space. Rather disquieting, for any future perspective seems to be lacking. In The Red Capsule the ‘instrumentarium’ rules. The view from The Blue Control Room (2012) is roughly what the Mars rover ‘Curiosity’ encounters during its search for life: a barren landscape. With Remembrance of the Sun (2012) Kristin Sæterdal strays into the unknown … but what exactly. The nose of a submarine (but then for descent under solid ground) shines a beam into a grotto. If the subterranean vehicle is not already fast aground, then it is appears to be only a matter of time. The beam of light has managed to spot a stairway, the question however is where will it lead. In his poem Tinglyse inspired by this work, Gro Lauvland associates the setting with a skull. The place we find ourselves wandering around in could then be where the spirit has vacated the skull and where even the sun is lost from memory.

Visually Kristin Sæterdal is a child of pop art, strip cartoons and graffiti. As regard content the ideas come thick and fast. But there is plenty of time because her working method is somewhat time-consuming. Her drawings for the design have the sketchy speed of the graffiti artist. Transforming them into something tangible is another matter. Sæterdal dyes her wool herself and weaves on a loom according to the basic principle of the weaving technique, thread by thread. The sketches serve as cartoons; her execution is decidedly more precise. Bit by bit the weaving process constructs her worlds. NB: Because of the size of her work she weaves sideways and only sees the results of her labours when the tapestry is unrolled and cut from the loom. Only then is she able to lose herself in her own work.

True to nature, Kristin Sæterdal renders her ideas through a visual vocabulary that simplifies. No matter how alluringly beautiful her tapestries are, the sense of disquiet is not diminished but almost physically tangible. written by Artaz

It will be a great show with these artists: 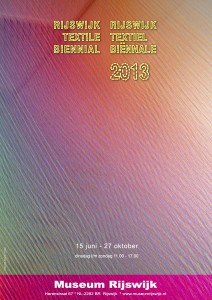